History of the Rehoboth Ambulance

Founded by Floyd Field and Milton Mann, the Rehoboth Ambulance Committee has served the town of Rehoboth since 1954. 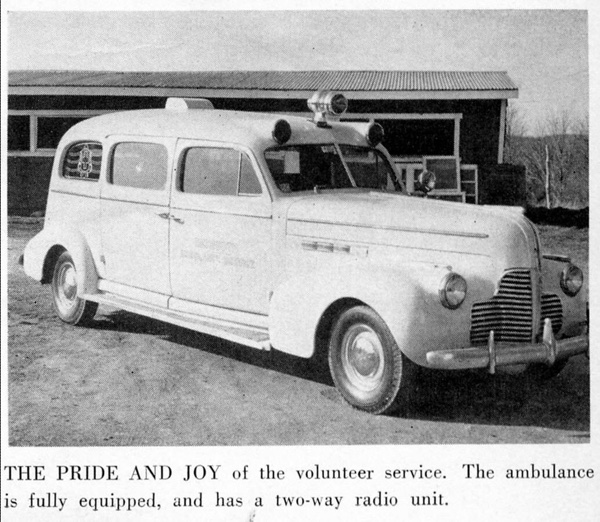 On a sultry Memorial Day in 1954 Floyd Field, Providence Ice Cream salesman, answered his first emergency call for the Rehoboth Volunteer Ambulance Service. With the wail of the ambulance siren echoing in his ears, Floyd sped to a near-by field where a neighbor and his son had been injured in an airplane crash. The members of the ambulance service whirled into action in an effort to free the injured from the wreckage. First aid was given and tourniquets were applied to the torn bodies but the plane had been so badly damaged that it was almost an hour before Floyd's neighbors could be removed from the debris and rushed to the hospital. Thus, Floyd tasted his first experience with the newly formed Rehoboth Ambulance Service.

Just how does a lifesaving service such as this come into being? The idea was born during August, 1954 at a State Convention of a veteran's organization. Floyd's close friend, Milton Mann, proposed it first and Floyd agreed. Although some attempted to discourage them in the beginning, the were urged on with their project by their wives, Alice and Kay.

In October of 1953 Floyd spotted a 1940 Buick ambulance for sale. he contacted Milton at once and together they purchased the vehicle for $175.

An ambulance fund was started at first by direct solicitation, and later an annual fund-raising supper was held, with the proceeds furnishing the maintenance of the vehicle. The ambulance was accepted at no cost at the town meeting of mark, 1954. Anyone who uses the ambulance today is not charged for the service, and the drivers, attendants and nurses are all volunteers without pay. The service has made about 150 calls in the past two years.

Before the Rehoboth service was formed, an ambulance had to be summed from either Taunton, Attleboro, or East Providence. In an emergency, this meant the loss of valuable minutes as well as lack of service in the town that sent the ambulance. The Rehoboth Ambulance Service covers about 100 square miles of road and can be at the scene of most accidents within 8 to 10 minutes. In an emergency case the person is taken to the nearest hospital, but in non-emergency cases he may choose his hospital destination. Oftentimes the Service is summoned from outlying areas and has transported an individual as far as the state of New Hampshire.

Naturally, Floyd has found his experience with the Army medical Corps invaluable for this type of work. For that matter, all the ambulance volunteers are well trained and can administer aid at the scene of the accident. The fully equipped vehicle which can handle two litter cases at a time is now valued at about $2,400 with a two-way radio unit the latest addition.

Members of the volunteer service find that rescue work also has its tragic side in a small town, where an emergency call sometimes turns out to be that of an injured neighbor or friend. A situation like this calls for a lot of courage and self-discipline.

An around-the-clock vigil is maintained by the volunteers, some of whom have two-way radios in their cars, and manage to reach the scene of accidents even during off-duty hours.

Floyd's brother-in-law (Chief of Police in Rehoboth) first receives the emergency call by radio. He then relays the message to all volunteers on duty at the time, and the ambulance immediately goes out to the scene of the accident or illness.

In most large cities today emergency services are so well staffed and organized that volunteer units are not needed. However, in small towns like Rehoboth, they are invaluable and function most effectively. The Rehoboth Ambulance Services has also helped in the formation of another ambulance service in a near-by town.

Floyd Field lives with his wife, Alice, and their three children in Rehoboth. He's civic-minded in the most complete sense of the term. At present, he's a member of the Rehoboth Police Force, Chairman of the Cancer Fund Drive for Rehoboth, Vice-President of the Parent-Teachers' group for the junior high of the town. President of the Middlebrook Country Club, and even manages to squeeze in time to manage a Little League baseball team!